This article from ADWEEK, ran July 3, just before Independence Day in the USA – but offers us so many ideas for all the businesses that add joy/special moments of bliss/fun/escape – you-fill-in the benefit to our lives – think of what hotels, recreation, destinations, retails, transportation and so many more could offer.. think about it – how do you add joy to your customer’s life?  Now produce a video or message for use not only as an out-of-office message but for social media channels.

Now if you are a toy store, pet shop, ski resort, beach bar or more – you might just go wild with this idea – have big fun!

An entirely new way to send your corporate message!

Though people across the pond won’t be celebrating the Fourth of July on Wednesday, Heathrow Airport still understands the sentiment of a holiday week—as it proved in a new spot that’s all about embracing your vacation days.

Havas London, the British-based agency behind Heathrow’s now-famous ads featuring a pair of bears returning home for the holidays, created this new spot for London’s landmark airport. In it, a woman drafts her out-of-office message while sitting at her gate at Heathrow. As she finishes, she laughs with her two children before the family giddily gets up to board their plane.

Heathrow: Out Of Office  – link here: https://www.adweek.com/creativity/heathrow-out-of-office-ad/
“Heathrow is just as much about those longed-for week-long summer holidays as it is about weekday business trips and round-the-world epics,” Lynsey Atkin, creative director at Havas London, told Adweek of the spot. “We wanted to celebrate the small moments that have great significance when it comes to our precious time away with those we love. Setting an out of office is one such moment, where the world of work is packed away and our focus shifts to the really important people in our lives.”

The ad’s approach is simple: A reminder of the feeling that comes along with the seemingly-minute, yet instantly relief-inducing act of setting up an out-of-office message before heading out on an awaited-for vacation. Atkin says that going into the campaign, the Havas London team wanted “to tell a seemingly small story that had big resonance.”

To make the family interactions feel natural and relatable, the spot’s director, Tom Green of Stink Films, worked with the cast for two days of shooting “to allow for natural action and dialogue that feels utterly relatable and part of the fabric of family interactions that play out every single day across Heathrow,” Atkin said. 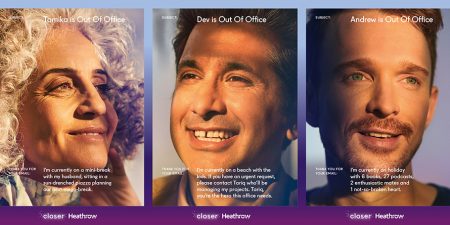 The campaign aims to highlight Heathrow’s “Closer” tagline, meant to showcase “the airport’s ability to bring people closer together for special moments every day,” according to a release. Beyond the video spot, also included in the campaign are several out-of-home ads featuring images shot by Christopher Anderson. In these ads, close-up photos of different faces are featured. At the bottom of each image, there’s a personalized out-of-office message.

“At its very heart Heathrow is about bringing people Closer to each other,” Atkin said of the message behind the Closer tagline. “And in a time when that seems increasingly rare, it feels fitting that a place that knows the power and emotion of being together should be flying the flag for it, however big or small.”

Thank you ADWEEK for another smart and creative story.  Laura